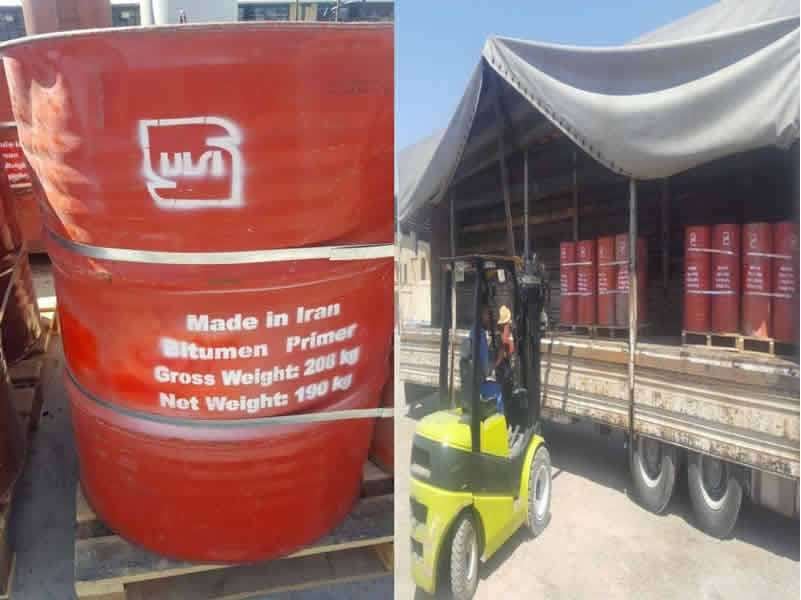 Bitumen primer D41 is like as cutback asphalt using undercoating in siding and roofing applications including shingling or acoustical installations. Without further fractionation or at least partial replacement of the asphalt volatile solvent materials, prior primer compositions do not provide desired adhesion between an overlaid sheet and the substrate. By addition of the present halobenzotrifluoride solvent, the volatile content is reduced to 200 g/l maximum or less and the flash point of the liquid cutback asphalt is raised by at least 5°. Further, the tacky modified primer composition described herein provides additional benefits, such as compatibility with a wide variety of substrate surfaces including metal, felt, fiber board, plaster board and wood substrates. When coated over a plywood roof deck, the present composition lubricates and preserves the wood substrate.

To liquid cutback asphalt, containing 30 wt.% of mineral spirits solvent, was added 10 wt.% of p-bromobenzotrifluoride to provide a liquid bitumen primer D41 having a VOC concentration of 186 gll and a flash point of 110°F. The resulting bitumen primer D41 composition was rolled at ambient temperature on a plywood roof deck in a 6 mil thick layer. Alternatively the composition can be sprayed or poured on the deck. The primer layer was then covered with an asphaltic base sheet which was nailed to the deck through the primer under ambient temperature conditions. A granular surfaced bitumen cap sheet was then applied over the secured base sheet by torching.

The above experiment was repeated except that a non-modified a bitumen primer D41, namely liquid cutback asphalt of 70 wt.% asphalt and 30 wt.% mineral spirits solvent was substituted for the halobenzotrifluoride solvent described above. The result of bitumen primer D41 had a VOC concentration of about 450 g/I and showed inferior adhesion to the roof deck.

It will be understood that many modifications and alterations can be made in the above bitumen primer D41 composition by addition of conventional excipients such as a thickener or diluent to alter its viscosity, or adhesive such as a pressure sensitive adhesive, without departing from the scope of this invention.

The present modified primer, which is a tacky, oily substance, is coated on the substrate as a layer in a thickness of from about 0.75 to about 12 mils, preferably a thickness of from 1-7 mils on a roof deck and then covered with one or more top layers of asphaltic material to provide a weather resistant exposed surface, e.g. A granule coated membrane on the weather exposed surface of the installation according with current specifications. More particularly, according to current specifications, installation generally involves applying a pacifying amount of the present primer composition to a substrate such as a new roof deck or an existing roof, or a siding or acoustical base surface. By way of illustration on a new roof, after applying the primer composition, an asphaltic base sheet is nailed to the deck through the layer of primer and a weather resistant, bitumen modified cap sheet is torched over the base sheet to complete the installation. The resulting installation possesses markedly reduced VOC concentration, rapid drying within 1-5 minutes and a flash temperature above 100°F.

Having generally described the invention, reference is had to the following examples which illustrate preferred embodiments and comparisons but which are not to be construed as limiting to the scope of the invention as set forth above and in the appended claims.