Urea with general formula (NH2)2CO, is a colorless organic chemical compound also known by the International Nonproprietary Name carbamide, as established by the World Health Organization. It is highly soluble in water and has a pKa close to zero. Urea is essentially the waste produced when the body metabolizes protein. It is not only produced by humans, but also by many other mammals, as well as amphibians and some fish. Urea was the first natural compound to be artificially synthesized using inorganic compounds — a scientific breakthrough which supplying by our company.

Application of urea in industries and some other fields

Urea is a component of animal feed, providing a relatively cheap source of nitrogen to promote growth, non-corroding alternative to rock salt for road de-icing. It is often the main ingredient of pet friendly salt substitutes although it is less effective than traditional rock salt or calcium chloride. Urea is main ingredient in hair removers such as Nair and Veet, also it is browning agent in factory-produced pretzels and ingredient in some skin cream, moisturizers, hair conditioners or uses as the cloud seeding agent, along with other salts. This chemical is flame-proofing agent, commonly used in dry chemical fire extinguisher charges such as the urea-potassium bicarbonate mixture and lots of other applications.

The produces large amount of this chemical and urea which has different specifications, ties the costs directly to gas prices. Consequently, new plants are only being built in areas with large natural gas reserves where prices are lower. Finished product is transported around the globe in large shipments of 30,000 metric tons. The market price for urea is directly related to the world price of natural gas and the demand for agricultural products. Prices can be very volatile, and at times, unpredictable.

Packing and usages of urea

Urea was found to be useful for commercial and industrial applications in the production of some types of plastics, animal feed, glues, toilet bowl cleaners, dish washing machine detergents, hair coloring products, pesticides, and fungicides. Medicinally, it is incorporated in the manufacture of barbiturates, dermatological products that re-hydrate the skin, and diuretics. This chemicals exporting by ATDM Company all over the world with 25 kg plastic bag and also available in jumbo bag.

specification  of  Urea 46% prilled or granulated 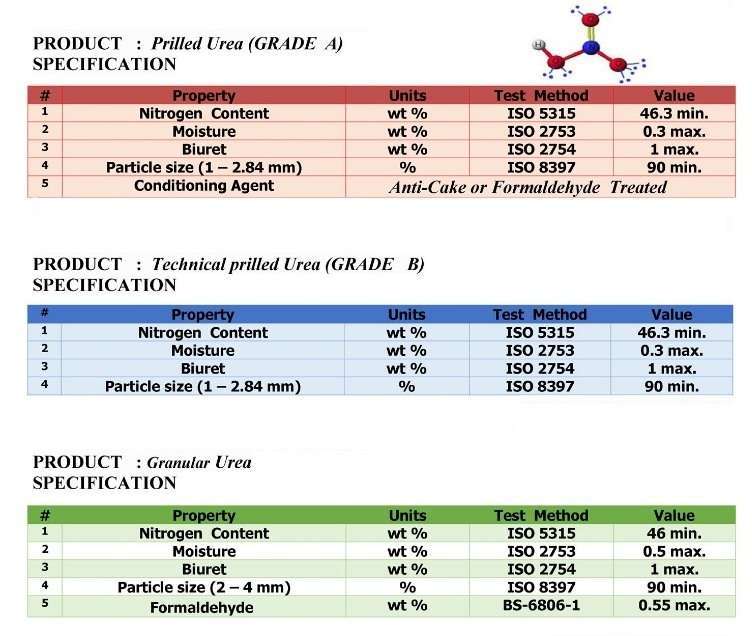