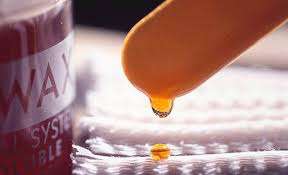 Wax is class of compounds that are melt-able solids near environment temperatures. wax include higher alkane and lipids, typically with melting point above about 50 C , melting to give low viscosity liquids. Waxes are insoluble in water but soluble in organic, non polar solvents. Natural waxes of different types are produced by plants and animals and occur in petroleum .

Wax is a general term used to refer to the mixture of long-chain lipids forming a protective coating on plant leaves and fruits but also in animals algae, fungi and bacteria. Some waxes are of mineral origin. The various materials named waxes do not form a chemically homogeneous group. All waxes are water-resistant materials made up of various substances including hydrocarbons (normal or branched alkanes and alkanes) .

More commonly, waxes are esters of an alcohol other than glycerol and a long chain acid (wax esters). Wax esters are saponified by hot alkaline solutions and give a fatty acid and an alcohol.

Wax is a term for a range of natural or synthetic products. For convenience the range can be divided in :

The natural wax can be of vegetable or animal origin.

The predominant wax of animal origin is beeswax .The most important representatives of vegetable origin are:

The most commonly known animal wax is beeswax. A major component of the beeswax used in constructing honey combs

Paraffin wax is a mixtures of alkanes usually in a chain lengths. These materials represent a significant fraction of petroleum. Paraffin waxes are mixtures of saturated n- and ISO- alkanes, naphthenes, and alkyl- and naphthene-substituted aromatic compounds. The degree of branching has an important influence on the properties. Millions of tons of paraffin waxes are produced annually. They are used in foods (such as chewing gum and cheese wrapping), in candels and cosmetics, as non-stick and waterproofing coatings and in polishes.

What are the components of wax

Biochemists link waxes with the thin layer of fatty constituents that cover the leaves of plants or provide a surface coating for insects or the skin of animals. All of these tend to contain wax esters as major components, i.e. Esters of long-chain fatty alcohols with long-chain fatty acids.

What is the melting point of wax?

Waxes are a class of chemical compounds that are plastic (malleable) near ambient temperatures. They are also a type of lipid. Characteristically, they melt above 45 °C (113 °F) to give a low viscosity liquid. Waxes are insoluble in water but soluble in organic, non polar solvents.

waxes are used in different fields based on their grades : cosmetic , medical , industrial

waxes can be loaded in drums , cartons , PP bags or small jars and cans